In southern Victoria and coastal NSW there’s nothing like the tinkling sound of Bell Miners but as Gouldiae pointed out recently in his blog http://gouldiaesblog.blogspot.com.au/2015/03/bell-miners-and-dieback.html it’s not always what it seems.

I visited the Drouin Nature Reserve on the outskirts of Drouin today, a small forest reserve with a relatively large population of Bell Miners.

Immediately I noticed the separation between these birds and other native birds. The Miners were located mostly in a patch of tall eucalypts as well as a some smaller eucalypt plantings. In these areas most of the eucalypts were covered in the native psyllid insect and their white sugary secretion called lerps. 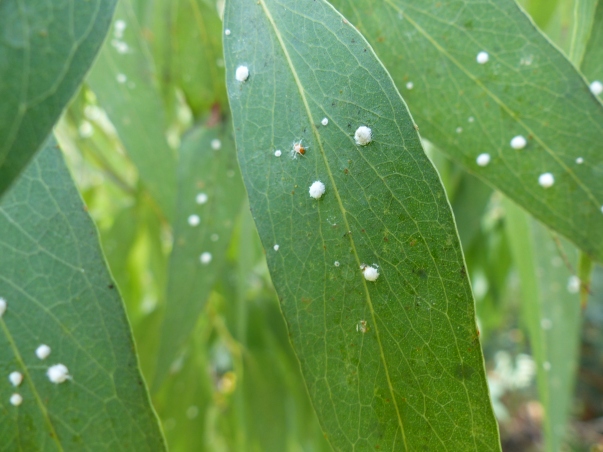 Lerps on eucalypt leaf. One psyllid is in the process of starting to secrete. 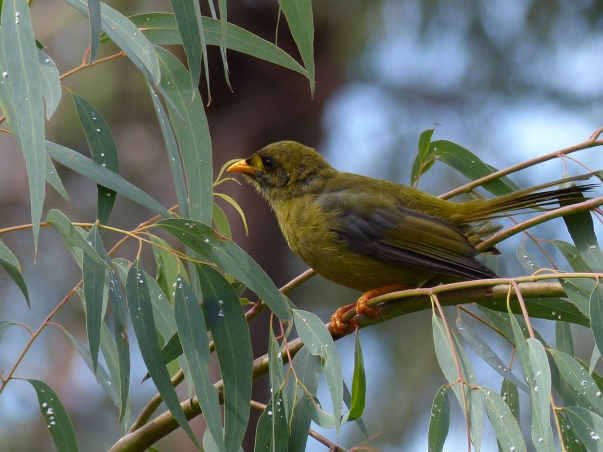 Bell Miner with a psyllid on it’s face

Some of the most heavily psyllid-infested trees as far as I could see were the smaller 4-5m tall plantings and these were surrounded by a large group of dead or dying trees, mostly E. obliqua.

To the right of this picture the Bell Miners were non-existent, even though there was suitable trees. This area had an variety of native bird species, some which tried to bravely enter the Bell Miner’s domain (possibly to feed on the lerps) only to be chased out by the highly aggressive Miners. This in turn allows the sap-sucking psyllids to breed up into mass proportions which eventually damages the trees but gives the Miners an abundant food source. The noise from the Miners was loud and incessant and the theory is that they do this so other bird species can’t hear their own contact calls and/or to advertise to other birds to stay away or else!

To the left of the picture many of the taller Eucalypts were also full of the Miners and some of the eucalypts were in the early stages of dieback as well.

Bell Miner calling while surrounded by a lolly shop of lerps.

I did notice quite a lot of European Wasps feeding on these lerps. These wasps are currently in almost plague proportions in Victoria due to the relatively mild spring and summer just passed. 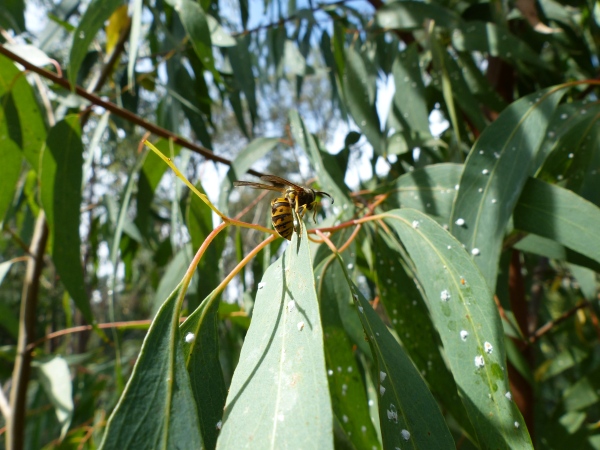 As the reserve is quite small and surrounded by farmland the effects of the dieback can be noticed quite well in certain patches. If the dieback is Bell Miner/Psyllid induced then hopefully this is only cyclic and they move to other areas to allow the damaged spots to regenerate.

One thought on “Bell Miners and psyllids”