Not many people are aware that right under our feet in Gippsland some of the oldest surviving types of terrestrial vascular plants in the world, the Lycopods of the plant division Lycopodiophyta. These primitive plants include species living today throughout the world such as the clubmosses, quillworts and spikemosses, among others. It is estimated that they first appeared in the late Silurian period around 420 million years ago and many have changed very little since then. The first dinosaurs didn’t appear until 160 million years later but no doubt some of them would have fed on these plants during their reign.

Baragwanathia longifolia is an extinct species of clubmoss and the first fossil specimen was discovered in the Thomson River catchment in Gippsland. It is regarded as one of the first vascular plants ever to have developed on land. 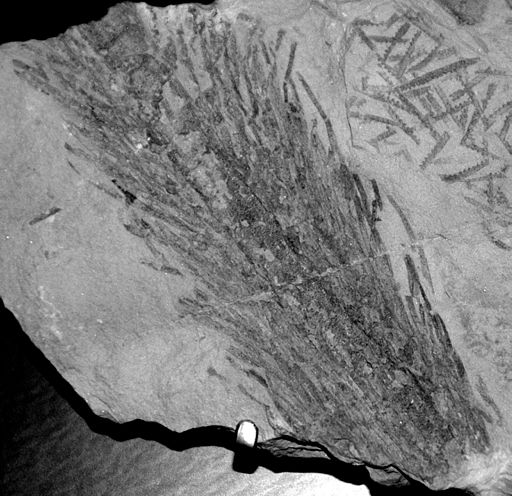 Early clubmosses such as Baragwanathia were probably small (up to 1m) but by the Carboniferous period (c.360 Ma) they were giants reaching 30-35m tall! Ferns evolved from these early clubmosses and both of these produce spores for reproduction.

One living species of clubmoss occasionally encountered in Gippsland and other southern and eastern parts of Australia is the Bushy Clubmoss Lycopodium deuterodensum. This species at first sight can look a lot like a small germinating pine and it can grow up to 1m tall. It is not very common in Gippsland but in South Australia it is considered endangered as many populations have been wiped out in this state.

Bushy Clubmoss is typically found in moist areas of wet heathland and open forests as well as disturbed ground. In west Gippsland I have encountered them in lowland forests, especially around Mirboo North, as well as in heathland near Walkerville.

They can reproduce by spores which are contained in a structure called the strobili at the terminals of the branches or they can spread by rhizomes, particularly after a fire.

Close-up of the strobili of Bushy Clubmoss. These produce spores and will go brown when ready to release.

So, when you’re out in the bush next keep and eye out for these ancient relics.

One thought on “Dinosaur food”